We are excited to announce the appointment of Helen Keplinger as the new winemaker for BOYANCI Wine. Helen is managing all aspects of BOYANCI’s winemaking including viticulture in concert with the growers in BOYANCI’s 4 Napa Valley vineyards. Helen expertly blended all 3 of the BOYANCI vintage 2012 wines and she meticulously managed every aspect of the vineyards and blending for the vintage 2013 BOYANCI wines.

Helen earned a master’s degree in enology from UC Davis in 2000 and after making wine in Priorat Spain she returned to California to launch her own brand Keplinger Wines as well as work with Heidi Barrett and David Abreu as a consulting winemaker at Kenzo. Later she became the winemaker at Bryant Family, making some of Napa’s most sought after wines. In addition to being the winemaker at BOYANCI, Helen also makes wine for Grace Family Vineyards and Carte Blanche and she continues to producer her own Keplinger Wines.

Helen graced the cover of the Wine Spectator magazine in June of 2014 along with a feature article lauding many of the excellent wines she has made. Keplinger was named the 2012 “winemaker of the year” by Food & Wine magazine and the wines Helen makes consistently receive critical acclaim from wine writers across the spectrum and more importantly are beloved by America’s most discerning wine consumers.

Under Helen’s watch eye, we will continue to produce our flag ship BOYANCI red blend as well as InSpire Cabernet Sauvignon and ROMAnce Cabernet Franc. With the addition of two new Napa vineyards chosen by Helen (one on Howell Mountain and the other in Oakville) we plan on expanding our wine offerings in vintage 2014 which will be released in 2017. 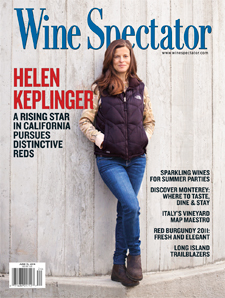